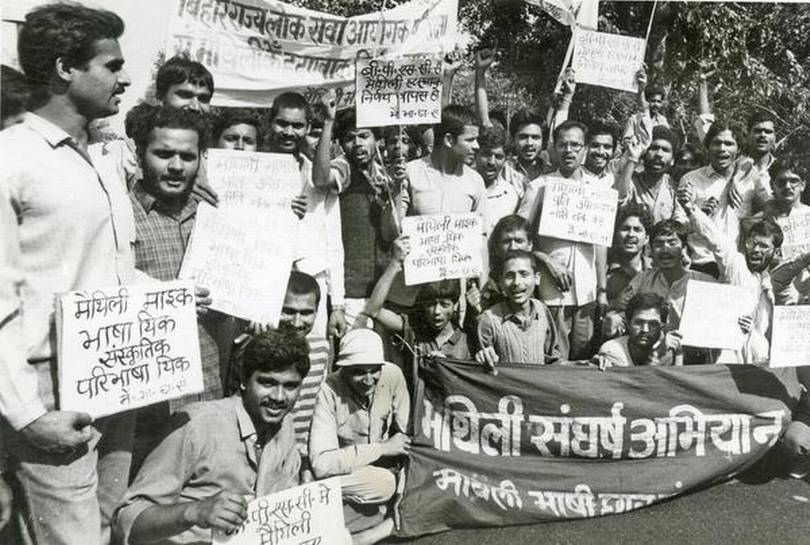 A nuanced study of the Maithili language and the movement that led to the formation of a modern Maithili community, and its speakers’ resistance to Hindi hegemony.

BIHAR is linguistically complex and diverse with spoken languages such as Maithili, Bhojpuri and Magahi, and dialects such as Vajjika and Angika, besides Santhali and many other languages of the tribal people of what is now Jharkhand State, which was carved out of Bihar. This diversity was possibly one of the reasons for the struggle to get Urdu recognised as a “second official language” in the late 1980s in undivided Bihar. Of course, this was possible because of a mass movement (munazzam awami tehreek) since 1951.

As against this, the move for similar status for Urdu in the neighbouring Uttar Pradesh State encountered hostility in the 1980s.

The Uttar Pradesh Official Language (Amendment) Bill, 1989, which was passed in the Assembly, could not be legislated as the Hindi Sahitya Sammelan appealed against it in the court. The Hindi-Urdu dispute triggered communal violence at Badayun in September-October 1989. Hindi protagonists raised slogans such as Urdu thopi ladkon pe to khoon bahega sadkon pe (if Urdu is imposed on students, there will be violence and bloodletting on the streets) against the move to legislate Urdu as the second official language.

It argues that the Maithili movement did not face such hostility from the protagonists of Hindi.

Although the book is empirically rich, it is, by and large, a dispassionate insider’s account of the history of language politics and nationalism through a fascinating literary journey of Maithili, a language spoken in a part of northern Bihar, with long antiquity and a rich literature.

Academic studies on vernacular political and cultural spheres are limited in India. In this respect, this study is a significant intervention in the attempt to fill the gap. It tries to “analyse the historical trajectory of the Maithili language and the movement that led to the formation of a modern Maithili community and various challenges to it”, while resisting its cooption by a hegemonic Hindi.

Contrary to the popular notion that Maithili is essentially confined to the dominant Hindu castes of Brahmins and Kayasthas, the author, Mithilesh Kumar Jha, essentially speaking, does not consider the Maithili movement to be caste exclusive. However, he seems to be missing a lived reality here. Bhojpuri is spoken by all, regardless of caste and religious identities, whereas not many Muslims of Mithila would speak Maithili. Rather, a considerable proportion of Mithila Muslims speak a dialect that is essentially identified with Urdu.

The appendix contains useful and informative profiles of around 47 literary and political protagonists of Maithili, almost all of them either Brahmin or Kayastha; barely one or two could be Khatri. Of these, two are from the 14th century. Some of the 19th century protagonists wrote their books in Urdu as well. One of them is Bihari Lal Fitrat, whose Aina-i-Tirhut (1881) is an informative account of local history.

The author further argues that the linguistic and cultural boundaries of the Hindi heartland are porous and heterogeneous, resisting the homogenising politics of Hindi supremacy. Maithili has been resisting Hindi hegemony even though it had to give up its own script and adopt Nagri, which could otherwise have helped Hindi in coopting Maithili as its dialect, rather than as a separate language.

Another finer point missed by the author in this otherwise deep and nuanced study is that the boundary of Tirhut-Mithila that he has defined includes dialects such as Angika (Bhagalpur), Vajjika (in parts of Muzaffarpur-Vaishali) and Surjapuri (in parts of eastern Bihar, specifically Kishanganj).

“The idea of India as a secular nation enters a phase of crisis in contemporary times with the majoritarian turn in Indian politics,” which the author says should prompt academics to probe a series of issues on the “formation of the Indian nation and nationalism and its various fault-lines based on language, religion, caste, peasants, tribe, gender, and regional or sub-national politics”.

The author, therefore, goes on to explore the dialogic relationship between heterogeneous imaginations and the homogenising idea of the Indian nation—secular or Hindutva. This brings out the significance of this study much more meaningfully.

Under this premise, he raises some pertinent questions and tries to find answers: How did the vernacular communities come to terms with nationalist ideas? How and on what point did they challenge or even oppose nationalist claims? How did traditional communities encounter Indian modernity? What is the lingering effect of that encounter? How did they assert themselves and put forward their demands in a post-colonial context?

In some ways, linguistic politics in the post-Independence period needs to be studied in comparison with the struggle for obtaining the “second official language” status for Urdu in Bihar and Uttar Pradesh.

In Bihar, despite Hindi supremacy, Urdu protagonists succeeded in obtaining some concessions through sustained, inclusive, popular mass mobilisations. In Uttar Pradesh, however, the story has been quite unfavourable for Urdu. The author has avoided engaging with this academically and politically significant aspect.

The political mobilisation for Maithili began taking shape in the early 1920s. This was the time when a journal called Mithila, which “was very radical and courageous in its opinion about social reforms”, was published. “It consistently supported the cause of women’s education. Similarly, issues like the abolition of purdah, unmatched marriages, child marriages, and the institution of widow remarriage were raised against stiff challenges from the traditional orthodox forces in society” (page 123). This was also the time when Maharaja Rameshwar Singh of Darbhanga (in 1921) for the first time raised the demand for a separate State of Mithila on the basis of the concept of creating “a series of self-governing provinces and principalities federated by one central government” (page 156).

Tracing the political trajectory of the language movement, the author argues that from the 1950s onwards, the leadership of the Maithili movement was no longer confined to the literary elite. He goes on arguably to exaggerate that this movement became much more ambitious to claim “Mithila as a union republic” (page 167).

As a scholar of political sociology, the author should have been reasonably and objectively critical about the base, strength and degree of popularity of such ambitious demands. He, however, has taken into account the fact that the movement remained confined to the middle classes, with the masses remaining largely indifferent. He says: “Although the social base of the Maithili movement has increased considerably, it is yet to acquire the form of a mass movement.”

One of the many important reasons for this, according to him, is the “marginalisation and absence of Maithili at the primary and secondary level of education” (page 256).

The author has given a detailed account of the congregations of Maithili speakers at Kolkata’s Girish Park, from where the demand for a separate State for Mithila intensified through many organisations and mobilisational activities. He has quite admirably employed anthropological methods to explore the Kolkata-based activities of the organisers.

However, after the 1980s, migration from Bihar to Delhi was higher than the migration from Bihar to Kolkata. The author should have probed if the Kolkata-type mobilisations happened in New Delhi as well. If not, then the issue awaits an academically informed explanation. Nonetheless, in recent decades, there have been major shifts in the Maithili movement. The issue of the economic development of the region is increasingly becoming an important agenda for social and political mobilisation, and yet, “it has failed to sufficiently connect with the masses”.

The author has not touched on the following questions: Whether this movement, while struggling to expand its social base beyond Brahmins and Kayasthas, is really trying to reach out to the Dalit and Muslim communities? How meaningfully do these communities identify themselves with the movement and its leadership?

Scholars such as Paul Brass (Language, Religion and Politics in North India; 1974), and Richard Burghart (A Quarrel in the Language Family: Agency and Representation of Speech in Mithila; Modern Asian Studies, 1993), besides administrator-philologist George Grierson (An Introduction to the Maithili Language of North Bihar; 1881) have published rich accounts of the Maithili language, literature, and its politics.

The book under review has made an impressive advancement upon all these. The author has drawn heavily on hitherto unused Maithili sources as well and has delved deep into a variety of primary sources. The book comprehensively engages with secondary works and deals with theoretical aspects lucidly. It is a specimen of hard work and wide scholarship. The book will be immensely useful to sociolinguists, political scientists and historians.

Mohammad Sajjad is professor at the Centre of Advanced Study in History,Aligarh Muslim University, Aligarh. He is the author of Muslim Politics in Bihar: Changing Contours and Contesting Colonialism and Separatism: Muslims of Muzaffarpur since 1857.