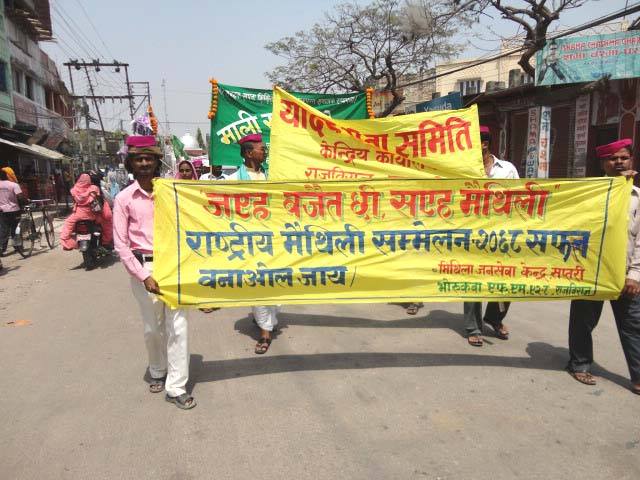 A Report by Dr. Jaykant Mishra

The languages of India were made an important part of world culture and history years ago. The British Government was conscious of finding out and making them known. In this regard the contribution of Sir George Abraham Grierson was memorable and considered so remarkable that the Congress of Orientalists which met in Vienna in about 1880 and passed a resolution that the Government of India should despute Grierson specifically to organize the information and carry out a Survey of Indian Languages systematically.

The result of this step was of course made public in the form of the Survey of Indian Languages which ended in about 1940 when Grierson died. But it created history in the world. Some historians went to the extent of declaring that modernity came to the world by the discovery of Sanskrit. The study and cultivation of Indian Languages developed into the fast growing science of philology.

This matter became important with the growth of democracy in India. It was felt by the Government of India Act of 1935 when vernacular became the crux of establishment educational system in the governance of India on democratic principles.

In this background there appeared on the scene a great movement called the P.E.N. in England. The Indian branch of P.E.N. was organized by a lady named Madame Sophia Wadia of Bombay. She made it possible to build up a platform of Indian literature in India. It was the great effort of the Indian P.E.N. subsequently that Indian scholars and leaders made it known that the mother tongues of India had several important literature, later on in about 1953 the Government came to organize Sahitya Akademi in New Delhi in which it named about 14 languages in the 8th Schedule of the constitution of India. In this way some languages came to be ptronized and developed by us all.

Somehow even in this list many important languages were left out so that by now a few more have been happily added such as Nepali, Manipuri, Konkani, Dogri, Santhali and Maithili.

Meanwhile the world politics has become not only international but global. But the number of languages in the world has become numerous so that it is found to be an obstruction in the development of globalization and its circulation by the media.

Nevertheless it is very difficult to forget the love of peoples for their mother tongues because of human sentiments and the need of preservation of the history and culture of various inhabitants of the world. Therefore it has become imperative to find out how both streams of development – (1) that of unity in a vast country like India, and (2) also the various charming histories and cultures of India.

The Committee which is proposed to be set up in Kolkata should specify how it can be possible to do so. One way is to insist on the teaching and writing in them by those who give due respect to their ethnic and cultural identity and the other is not to allow political interference. These ways should be applied to the development of Sanskrit and Maithili as deserving languages.

The Case of Maithili

The people of speaking Maithili gradually became aware of their historical and cultural importance of their mother tongue. In 1937, Maithili was introduced in the University of Patna and it came to be taught in primary and secondary and finally in the graduate classes by 1953. In 1972 it was allowed as a subject in the Civil Service Examination of Bihar.

In 1960, the Census of India gave a respected place and announced the number of its speakers 49,82,615. Subsequently Government of Bihar stopped its publication in the Census of India and also abolished its teaching in Primary classes, High Schools and in the State Civil Service Examination. Today it has not yet been restored in spite of being declared as one of the languages in the 8th Schedule of the Constitution of India.

The Maithili speakers went to the High Court and won the case against the Government of Bihar. But it has been hanging in the Supreme Court of India. In other words, practically Maithili stands abolished in the name of unity of Bihar.

The constitution of India says that it is the duty of the sate to promote the spread of the Hindi Language but the “other peoples’ cultures, languages and ethnic identities cannot disappear in thin air….”, “any effort which means a conflict to play up insult or demean language of a particular community should be discouraged by the state government. This is anti-constitution. Such an action would be an antithesis of the composite culture of the nation, a concept desired by the constitution. Maithili is a distinct language spoken in Bihar and parts of Jharkhand. Such of those persons as claim that it is their mother tongue, then in conformity with the Government orders and in keeping with the spirit of the constitution Article 150A, a teacher has to be appointed at the primary stage to impart instruction in the mother tongue which the children speak. The circumstance is not only of Maithili but should a community desires…. the state is obliged to make arrangements.”

Maithili and other recognized languages have importance of their culture and history. This cannot be illustrated here in a short time.

The Case of Sanskrit

Sanskrit is also suffering in spite of the fact that Sanskrit can also lead to national unity and give advantage to globalization and advancement of knowledge through computers and the media. It has obviously been relegated as it is not a vernacular mother tongue but Indian culture and history will suffer a great degeneration of Indian matters in the world if it is not promoted. It is a fact which is often forgotten and neglected.